The name of Jeroen Goossens is renowned in the world of international pastry and catering. From professionals to foodies: everyone knows this pastry chef by excellence. If not, they are at least familiar with his seductive delicacies. From extraordinary pastries to artistic creations: Jeroen Goossens does it all. During many years he belongs to the top league of the world. (According to the top French pastry chef Pierre Hermé the chocolate cake of Jeroen is even considered the best) And yes, he is also the man behind the wedding cake of Willem-Alexander and Maxima.

Being a pastry chef of the Royal Family since the year 1989 he makes the pastry during exceptional occasions and the desserts for official banquets. His impressive CV includes even more cherries on the top. His trophy cabinet is just as full as his pastries, including amongst others awards from the prestegious Coupe du Monde de la Pâtisserie in Lyon (France), where he has occupied the awards podium a number of times.

As an enthusiastic pastry chef he is more than willing to share the secret of the Master of Pastry. Jeroen is a mentor of the new generation of pastry chefs; in the kitchens where he works, as coach of international pastry chefs and as a lecturer in professional training environments. He also does demonstrations in the country for both professionals as semi-profs and hobby chefs. Everbody is able to learn a lot from him. Jeroen can rightly be called the ambassador of the pastry chef profession.

The tried-and-tested recipe of Jeroen Goossens has perfection as its basic ingredient. He constantly pursues the challenge of further raising the bar. He is constantly triying new recipes and techniques for his clients and in his development kitchen.

“When it comes to pastry creations the results are in your own hands from the beginning to the end. The result is depending on what you do with, for example the butter, flower, sugar and eggs. From taste to the texture, form, aroma and coulor. The challenge is to make a creation that is as optimal as possible and to provide the guest with an overwhelming experience”. 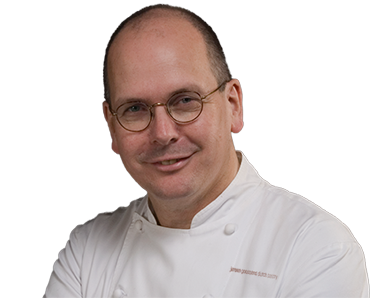